↓
Get Master of Words Menu ↓

Once you are in the game, all you need to do is to use the 16 letters available on the board to form words. Tap an active letter on the board to type it. The word you are forming shows up in that top area of the screen. Let’s call that area the “tray”. You will see that letter moves to the tray when picked, so each letter block can be used only once. 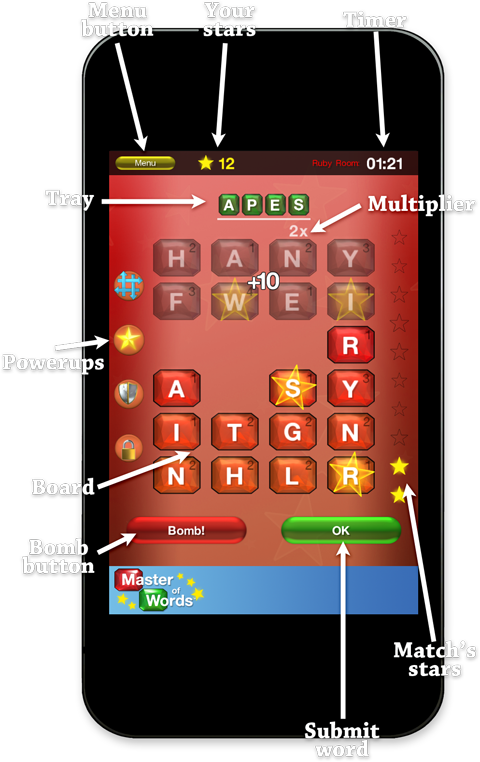 After you pick up the letters for the word you want to form, tap the “OK” button to submit that word. Words must be at least 3 letters-long to be accepted and only words that exist are valid. Once the word is accepted, you will see how many points that word gave you including all bonuses. Trying to submit words that don’t exist or proper names will result in the letters just going back to the board.

Each match has a time limit of 2 minutes, so the quicker you are to find words, the more you will score. You will find the timer in the upper-right corner of the screen.

What if I make a mistake?

If you mistyped or found a better word, you can quickly remove letters from the tray either by tapping it or through the Erase Gesture, that is even quicker! To perform Erase Gesture, just flick downwards anywhere on the screen. As you flick, letters will go back from the tray to the board.

What if I can’t find any word on the board?

See that button that says Bomb!? Give it a try! It will blow up all the 16 letters available, either in the board or in the tray, and a new set of letters will drop down in the game!

What’s the deal with those grayed-out letters?

Those inactive letters above are the ones that will become available to you when there is space for them on the board! Think of them as a foresight so you can plan to form better words. You sure have noticed that, once letters are consumed, the space left behind by them is filled up by other letters that come from higher in the board. In fact, you are playing with an infinite stream of letters that come down as you comsume them, besides only the bottommost ones being available.

Can I play it with my friends? What about the online ranking?

Yes! To play it with your friends, all you have to do is invite them to play!

Whenever you play Master of Words, you always do that with everyone else who is playing, all around the world! Choose you player-name, pick up your flag and give your best!

When a match ends, you will see all words you made and the score you earned for each one. Then, you will see the effect this match had in your profile and your progress in the game. The more you play, the best your stats get! Finally, you will see the worldwide rankings, showing the 10 best players in that match and your position.

The score for a word depends on what letters were used and how long is the word.

Each letter has its individual number of points. You can see it as a faint number in the top-right corner of each gem. Letters that are more commonly found in words, like “A”, are worthy only one point, while the more rarely occurring ones score higher. The digraph “QU” scores as high as 10, for instance. As you pick the letters for your word, you can see how many points there are in that word, near the center of the screen.

You can always check the multiplier of your word while composing it in the lower-right corner of the tray.

What is the best: lots of small words or long, big-points words?

Both strategies work fine. You can give both a try and pick the one that fits your style better!

A word formed with a diagonal

If you clear all spaces in a straight line while making a word, the final score of your word will double. Any entire row, column or diagonal will do! It is easy to see when you hit a straight line: a lightning bolt will clear the line and the multiplier will show up.

What happens if I clear, say, a row and a diagonal at the same time?

What about those starred gems?

Stars give further points. Each star adds 50 points to a word! Also, stars are used to activate special power-ups!

Each round, there are 10 stars scattered through the board. After the match finishes, these stars go to your stars counter and can be used in the next match. Also, leveling up, completing achievements and making it to the top positions of the ranking give stars as a reward.

What are the power-ups and how to use them?

Power-ups are special actions you can use to increase your score. Each power-up use some stars to activate and are limited to a number of uses each match. To use them, tap the power-ups tabs on the left side of the screen.

The Shuffle power-up change the position of the letters occupy in the board. To use it, form a word and, before submitting it, touch the power-ups tabs on the left side of the screen then tap the Shuffle icon.

It is useful because it has a big chance of forming rows, columns or diagonals, as long as have a number of letters in the tray. Always use it after you have devised a big word. It is awesome when used in conjunction with big words!

Besides powering up your gameplay, stars also give big points. This power-up calls down all the stars remaining in the board to fill the non-empty positions. To use it, tap the power-ups tab and then the Falling Stars icon, and watch as the stars fall down. Use with care. You don’t want to end up with a lot of good stars on letters that are of no use to any word, do you?

And no, it will not activate if there are no stars left on the match.

This power-up works like the bomb, but does not blow-up the letters that are in the tray. To use it, put some letters you want to preserve in the word tray and activate the power-up. All the letters still in the board will be destroyed and new ones will fall in to fill the new space.

This power-up is useful to complete a word that has one or two letters missing, and you see that they will fall in when other letters left on the board are gone.

This is the most powerful power-up in the game! When activated, it allows you to use all letters visible in the board, including those that are usually grayed out!

It is best used when you spotted a big word and a few letters needed to complete it are visible on the top!

In Master of Words, the more you play, the better you look. As you progress through the game, the points you earn in each match accumulate and you level-up. Each level has a badge associated with it. All players start with a plain, small bronze badge at level 1. As you progress, your badge gets bigger, richer and more detailed, and always appears beside your name. Do you have what it takes to attain level 100, the Master of Words?

The conditions to fulfill change from objective to objective, but you can get a hint about what you have to do to earn it by reading its description. Slide the achievements to the left or right in order to cycle which one is in focus!

The only information it is required for you to start playing Master of Words is a player-name you can choose. This name will be used to identify you whenever needed, like the Online Rankings, for instance.

In the case you have to remove and reinstall Master of Words, you can set a password also. This way, you can use the very same player-name and keep your stars, achievement and general progress in a new device, for instance.

It is a good idea to do the in-game tutorial. It gives a good starter about the basics of the game and also helps you out to create your player-name and password.

I liked the Master of Words page but, still, I didn’t get the achievement!

I just got some stars but the power-ups are missing!

What it that Qu thing?

Why are there two different rooms? How does the game chooses in what room will I play?

I just did an awesome score, but it doesn’t show up in the rankings page! What’s wrong?

Do the line multiplier bonuses affect the points given by stars?

Do I lose any points when I consume stars?

Any tips on how to increase my score?

Why can’t I type my words on the keyboard?

If you have further questions, suggestions, etc, don’t exitate to make contact with us. We will love to hear what you have to say!

Master of Words™ is available!